A couple of days ago, I had an assignment for an Information Retrieval class that basically involved:

For the second part of the of the assignment, performance was pretty important. Since we would want to return results for the user's queries quickly.

This blogpost is basically about how I used python's cProfile to identify and fix bottlenecks/slow parts in my code. Most of these bottlenecks would have been hard to identify without the profiler.

During my internship at Quora, one of the things I worked on was POST speed improvements for core actions across the product. It was my first brush with speed work and the main lesson I took away was the importance of measuring and profiling before attempting to optimise.

"Bottlenecks occur ins surprising places, so don't try to second guess and put in a speed hack until you have proven that's where the bottleneck is." - Rob Pike

After getting a working submission out. I proceeded to measure/benchmark my code. Since this program was meant to run as a script from the command line, I used the simple time command-line tool to roughly benchmark how fast my code was.

Once I was happy with the measurement, I proceeded to profile my code using cProfile.

The -o flag basically specifies an output filename for cProfile to write its output to. (Without which, it'll simply spit out the stats to the stdout, which is undesirable since we'd be unable to sort/drill down into specific functions.)

Making sense of the cProfile output

The cProfile output is a basically binary file that contains the following information:

(For each function called in the python program)

If you didn't specify the output, you'll basically only get a dump of the information without the caller/callees part. (Which is quite helpful in making sense of everything). You'd also lose the ability to dynamically re-sort the information based on your preferred metric (unless you re-profile it with a -s flag (I think)).

In order to read this binary file, python provides a pstats.Stats class that happily spits out the various infomation for you in a python shell (when called with the relevant methods).

I found this rather tedious and googling around for an easier way to read this binary file yield nothing. I just wanted a simple way to:

(These as oppose to manually calling methods on the Stats object each time.)

So I wrote this: CProfileV. Which is bacially a thin wrapper for viewing python cProfile output in your browser. Yay!

[UPDATE]: cProfileV has been updated. See https://github.com/ymichael/cprofilev for the latest usage instructions.

The pstats.Stats object allows you to sort by the various keys and their combinations. Most often, I find that the most useful sort keys are:

Sorting by total time for me yielded this: 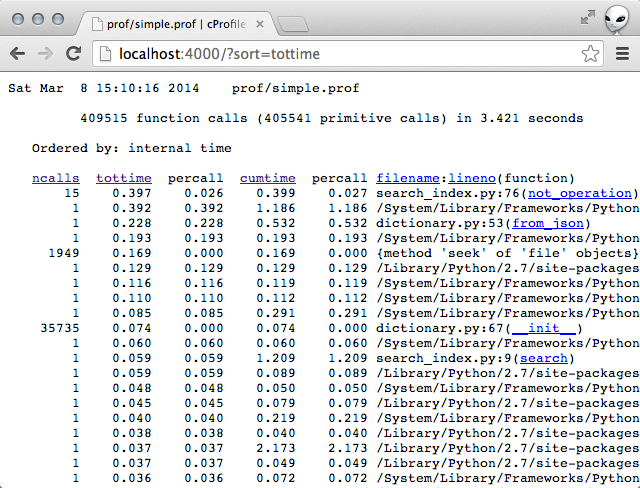 The top line stood out to me. The function not_operation was taking a suspiciously long time.

Clicking into the not_operation showed that the functions it was calling were not taking a lot of time. (Implying that the slowness was due to some code within the function itself.) 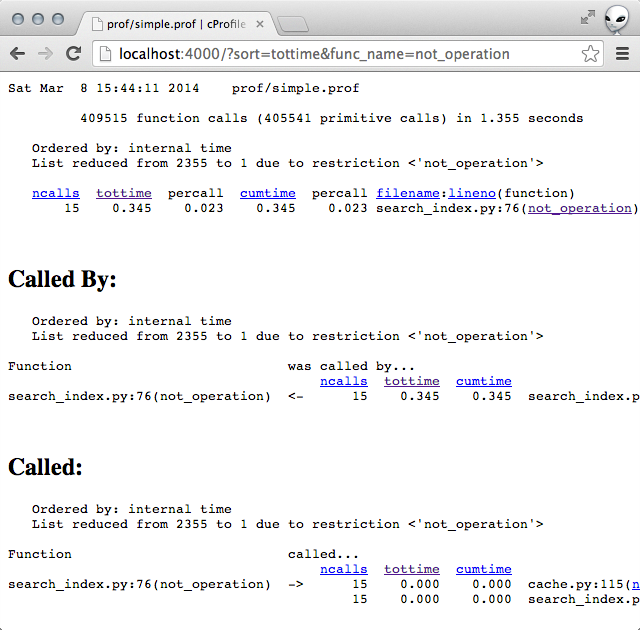 So it turns out that the list comprehension in the function was basically really inefficient. It became super obvious once I narrowed down that not_operation was slow.

Excited to have found a possible bottleneck, I quickly implemented a fix.

Profiling the code showed that the slowness was no longer coming from not_operation. 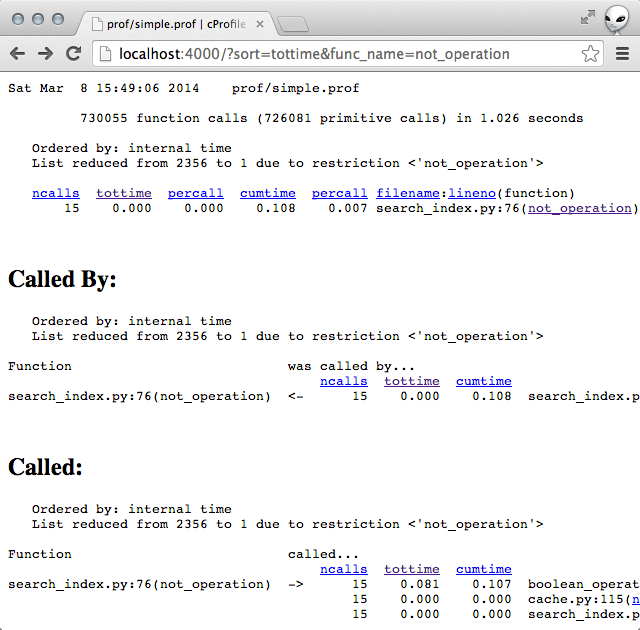 This time though, the most of the time seemed to be spent in the list_a_and_not_list_b operation. 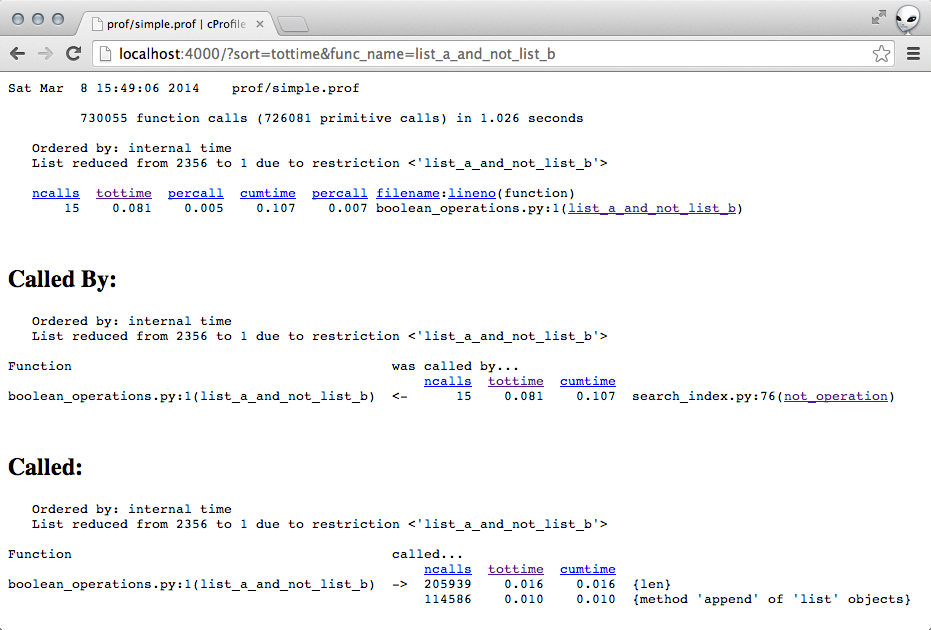 In particular, I seemed to be doing ~200k len operations and ~115 append operations on some list objects.

This seemed like a red-flag so I took a closer look at the list_a_and_not_list_b function.

It turns out that I really didn't need the while loop at the end of the function.

Measuring with this new change:

Woot! Got it to run under a second!

Overall, I'm pretty happy with the performance gain I got. I did a couple more that I didn't cover here (some other boolean operations were performing poorly under other testcases). Its a pretty cool feeling to methodically find bottlenecks and fix them.